Not only did Harriet, my great grandmother inspire me to write, but also my interest and love for the island of Alderney itself. In fact I see the island of Riduna (Riduna is allegedly the Latin name for Alderney, the third largest of T 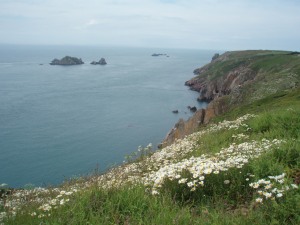 he Channel Islands after Jersey and Guernsey ) as a main character in my novel.

There is only one small town which has probably changed little since Harriet, my heroine’s time with cobbled streets, quaint shops and intimate restaurants.  There is a variety of good quality hotels and guest houses for all needs and tastes, from the modern and exclusive to the homely and warm.  Alderney is a haven to enjoy walking, golf, swimming, fishing, observing local wildlife or just relaxing quietly on the superb beaches. The public houses are quite famous for their welcome too! It is well known by sailors, who are brave and experienced enough to attempt its, at times, deceptively treacherous waters.

It is surrounded by fortresses, giving a majestic look to the beautiful sweeping sandy bays and tiny coves. Although known as The Gibraltar of the North in its heyday in the mid nineteenth century, these defences were never used, not to defend Alderney or the islanders that is. The island’s most famous period of history was in the evacuation and occupation in World War Two, when all but a few islanders were rescued and dispersed throughout the UK from Southampton to Glasgow, some never returning. If you do a Google search for ‘Riduna’ you will find me of course, but you will also find a grocers in Glasgow that bears the same name.

The history of the occupation was an unfortunate blight on the island where British soil was used as a concentration camp and, when the Germans finally left and some of the islanders returned, they found homes wrecked, and many possessions and records destroyed, but with fortitude and determination they slowly rebuilt their homes and lives. The local people today show a wonderful community spirit and resilience, many of whom have descendants who were the original evacuees and they warmly welcome visitors into their midst .

I believe that Alderney is able to maintain and protect its unique beauty, peace and culture partly because it is not as accessible as its sister islands of Guernsey and Jersey, but those who do visit often find themselves returning time and time again. It is a place to relax and recharge batteries, ready to return to stressful lives back home. Many like me fall in love with the island and are reluctant to leave it. Alderney has recently been described as one of Britain’s best kept secret holiday destinations by The Lonely Planet, so if you fall in love with Alderney like I did, don’t tell everyone will you! ‘’’

One review on Amazon wrote of the novel Riduna:

‘A touching and memorable storyline playing out in a unique setting. As a regular visitor to Alderney (Riduna) I got a thrill out of recognising familar places and being able to picture the characters in places I know well, as well as finding out a little more of the social history of the island.’

3 responses to “Alderney – My Inspiration”