Published back in the 70’s you cannot be interested in the history of Alderney without reading this book from cover to cover. 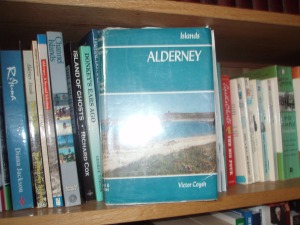 First Victor Coysh tells us general facts about the island, its location, and ‘present’ day forms of recreation, communication and transport. Of course, much of the information is a little dated, but Coysh is in agreement with today in that, despite offering boat trips, ferries and even a hydrofoil service over the years with greater and lesser success, the main and most reliable form of transport to Alderney is to fly. (Having said this I hear that a new ferry service started last year and so I wish them well.)

Within his ‘rocks, fauna and flora’ chapter Coysh explains the controversial belief that the ‘Alderney’ breed of cattle never actually existed and he also mentions the harvesting of Ormers, recently highlighted by Visit Alderney. I was surprised that he omitted to mention ‘the famous white hedgehog’ of which the island boasts today, or even black rabbits, which I have seen myself, even though he does note an abundance of rabbits. This left me inquisitive as to whether these species are a new phenomenon. Can anyone update us here?

The next chapters share with us a brief account of Alderney’s history, beginning with prehistoric remains documented in detail by Frederick Corbin. He continues though the Iron Age to the Romans and then through the Middle Ages and on to the 19th Century, describing the finds of various archaeological excavations over the last three centuries and referring to documented evidence. Of great interest is the fact that Alderney, once part of the Duchy of Normandy, became linked with the English Crown in the thirteenth century, although not subject to it, and it is governed in much the same way today. His account of settlements over the centuries and the final establishment of St Annes as the main town on the island is quite detailed, and his mention of surnames of note fascinating, since many are still known on the island today and were certainly present before the evacuation in WW2.

The chapters on the nineteenth century and the building of the Victorian Fortifications including the Breakwater have been of particular interest to me in my research, followed by two poingnant chapters on the years of the occupation in WW2 and the islanders’ homecoming, the most famous period of Alderney’s history.

I was particularly inspired by the island’s customs and legends and many would find the descriptions of the numerous wrecks off the island’s shores interesting, although writers have covered this in greater depth since. Finally the book gives the reader a taste of the many delights a visitor can experience during their stay.

Alderney is timeless. With very little imagination you can walk along the cobbled streets and imagine the island as Victor Coysh experienced it andsee it through his eyes, but this book gives the most comprehensive account of the island’s history that I have read to date, written in an informative and readable fashion.

One response to “Book Reviews- Personally influencing my writing”