The greatest difficulties my characters experienced, if they worried at all about the outside world, was lack of communication and the difficulties of transportation. On Twitter during winter months, I occasionally see people sat at Southampton Airport, stuck because either Alderney or Southampton or both are fog bound. In the late nineteenth century some ships waited in the channel for over 24 hours for the sea fog to lift, because the waters were too treacherous to attempt the crossing with poor visibility.

My Book signing on Alderney

When we flew over to Alderney in July 2009 for the main launch and book signing of ‘Riduna’ we experienced other difficulties.  To our dismay the books had not arrived and so a stressful time ensued, of phoning my publishing 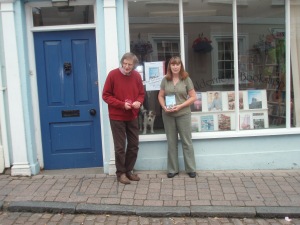 company, various departments of the courier company, the dock at St Peter Port Guernsey and Auringy the airline to Alderney, in the hopes of locating the exact position of the books on their journey to Alderney. Finally a promise was made to have the package delivered by the Saturday morning, only a day late, so we had a frenzy of activity placing posters up around the island announcing the postponement of the launch.

The islanders were totally unsurprised by the delay, as they explained later, even with Express Courier the item is first taken on the ferry to Guernsey. Here it is cleared at the docks before being taken to the airport. Even then its transportation on one of Auringy’s small Islanders from Guernsey to Alderney that day is by no means guaranteed, since it is then dependent on the numbers of passengers booked on to the flight and available space!

As it happens everyone pulled out the stops, as it were, and the books arrived on the original day planned. We received a warm welcome and news reached all the local publications including The Alderney Press, The Journal and The Guernsey News.

Difficulties have their own rewards

If you place the problems we encountered back in the late nineteenth century, I’m sure you can imagine the difficulties in communication and travelling. I believe that Alderney is able to maintain and protect its unique beauty, peace and culture partly because it is not as accessible as its sister islands of Guernsey and Jersey, but those who do visit often find themselves returning time and time again. It is a place to relax and recharge batteries, ready to return to stressful lives back home. Many like me fall in love with the island and are reluctant to leave it. Alderney has recently been described as one of Britain’s best kept secret holiday destinations by The Lonely Planet, so ‘if you fall in love with Alderney like I did, don’t tell everyone will you! ‘

Would be great if you have any funny stories of travel to share!

Filed under Alderney, History of Alderney