After enjoying writing my review of The Kings Whisperers by Kerwin Swint back in early May I have decided to make a book review a regular slot on my blog, whether it’s through ‘Novel Publicity’ like my last one, a book I’ve just read and enjoyed or one I’ve been recommended. 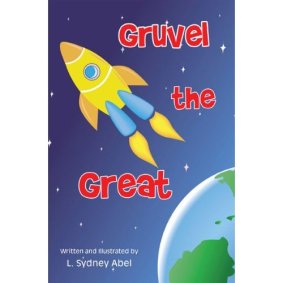 In a nut shell, a baby rhinoceros sized creature from outer space with an endearing nature, (well some of its habits are less appealing to adults but would be loved by the book’s intended readers) creates mayhem in a fairly normal household and even causes press interest. Why is he’ Gruvel the Great’? Because ‘Great’ is the only word he knows. Without giving the story away I can say that it has a happy ending, humour and a twist with a message at the end.

The story is fun to read and it has simple but effective illustrations. Although I do not have a child of a suitable age to hand for genuine feedback, I do believe that this book would be enjoyed and especially appeal to the reluctant reader.

I asked Lawrence some questions about his writing and I feel that his answers speak for themselves:

Q. What made you start writing books for children?

A. Well, that’s because of my own children and their bedtime stories. I used to read them their favourite books over and over again. Then one night, my daughter asked ‘What happens next’? I said ‘They all lived happily ever after’. But that wasn’t good enough for my little girl, she wanted to hear more! So what did I do? I took the characters from the book into a new adventure. Now, that was all well and good for a while. Then she asked ‘Who else can you tell me about?’ Mmm, I thought. And so then it began. I made up characters and took my daughter on their adventures. Soon, I was telling my son the same stories. And as my children grew up, story time lessened, then eventually stopped. I never thought about writing anything down at the time.

A few years ago, I had to leave my employment because I became ill. It was so bad that my body shut down. It took a good year to fully recover and during my time of recuperation, my wife suggested that I write stories. It seemed that writing for children was the obvious direction. Maybe I haven’t grown up!

Q. Where do your ideas come from?

A. That’s a difficult question. My writing never starts with any form of idea, unless it’s subconscious, of course. Usually, a word or name forms and my imagination takes over. It’s that simple. If I like the character I’ve created, then I go with it. If not, then the idea merely floats away like a lost thought. Like all of my writing, it grows from that small seed. I don’t pick a subject- in a way, the subject picks me. ‘Gruvel’ just popped into my head. I liked the name and thought, what’s a ‘Gruvel’? There was only one answer to that; he had to be alien and great. Then you start to think … an alien what? So in my imaginings, ‘Gruvel’ became this two-year-old, one-eyed ginormously large, baby-rhinoceros-sized thing. He was ugly but not unappealing. Then I thought, why am I calling him ugly, and why was I judging him? Then the reason for the story slowly came. Preconception of others starts at an early age. Who of us can honestly say that we’ve never judged someone because they are different to us? This could be anything from the colour of your skin, your view on religion or physical appearance. Gruvel encompasses all of those prejudices.

So, in a nutshell, my story is about acceptance.

Q. How do you plan your characters?

A. My characters present themselves in stages. As for Gruvel, well he had to be found by someone and who better than a woman. A woman’s heart instinctly goes out to children, more than a man’s. Gruvel says ‘G, g, g, g, g, great’ a lot, so 5 G’s meant the family’s surname had to begin with G and so did everybody’s Christian name. That was me having my bit of fun. Now you’re wondering, was that coincidental or was Gruvel destined to drink the milk on the Gregory’s doorstep? So however you see it, one way or another, these characters wrote themselves. Gruvel needed parents, he didn’t just grow from thin air, so enter the Taergs (that’s ‘great’ backwards for those that haven’t worked that bit out), and they needed names. Now I thought about that a lot and I thought while I’m having fun with reversed words, why not reverse their names? So I did, and again that’s me having some fun. If my story is meant to have humour, then why shouldn’t I make myself laugh?

Q. Can you give me a list of other publications?

A. I’m currently awaiting news for my next book’s publication. The book’s called ‘Timothy Other – The Boy who climbed Marzipan Mountain’. It’s for older children this time and has far greater depth than anything I’ve previously written, being 93,000 words long. Also, I’m putting my earlier work on Kindle, starting with ‘Marge and the Wobbly Onkey’. You can see some of my other ideas on my Facebook page ‘L Sydney Abel books’.

Q. Where can people buy the book?

A. The easiest is ‘Amazon.co.uk’ as there’s a bit of biography on me there, but it’s as easily obtained from ‘Pegasus Elliot MacKenzie’ the publisher themselves.  Also, it’s at ‘Waterstones’, ‘W H Smith’, ‘Tesco.com’ and ‘Zavvi.com’, or maybe just Google ‘Gruvel the Great’ and see where it takes you. You can see Gruvel anytime by visiting my web site

You can give me a wave, as I’ll be waving at you!

I wish him luck with his journey as a writer!