The Skallagrigg is a tale of a young girl Esther who suffers from Cerebral Palsy. She comes from a fairly privileged background where she wants for nothing, apart from that fundamental loss of her mother who died in childbirth. Her father ensures that she is given every opportunity to succeed in life and she attends the best educational establishments which caters to her needs.

As she becomes increasingly close to her father, grandparents and other close friendships develop, Esther struggles with coming to terms with her disabilities. It is not until she becomes aware of a unique form of communication between people like herself and also to hear stories of the Skalagrigg, exclusive fables to her kind, that she begins to strive to reach her potential. In fact, it is the quest to discover the origins and truth about these Skalagrigg fables that drives her on, not only to carry out research but to become a highly skilled computer games programmer. 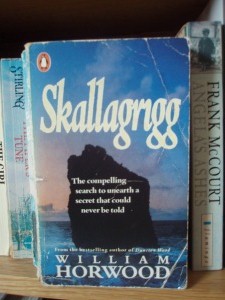 Esther wins a prize which leads her to fall in love, initially on line where she can fantasise about a relationship that she could never conceive to be a reality.  Against all odds ……. Well that would tell the whole story. I defy you not to weep at some point as you live with every moment of Ester’s challenging life.

William Horwood’s novel Skallagrigg is poignant, believable, tragic and moving and it stirred my emotions in a way which left an imprint on my life. Why? It challenged my perception of people but also the underlying trust that ‘The Skallagrigg will come back one day’ in all of the stories, which taught me that, even in the darkest circumstances, all it takes is a strong belief for human nature to have the motivation to survive and even thrive.

2 responses to “Skallagrigg by William Horwood”