I’m leaving, on a Sea Plane, Don’t Know When I’ll be Back Again!

The Loch was calm, the sun was shining through scattered cloud and the air was still and warm as we waited for the arrival of the sea plane which was to take us on one of the most exhilarating experiences of my life. It had been my greatest wish to fly in a sea plane or flying boat, ever since I embarked on research for Ancasta ~ Guide me Swiftly Home three years ago.

Although Ancasta is a family saga, part of its tale is the story of the birth of Supermarine through the eyes of my main characters, Harriet and her sons. This was a Supermarine long before the Spitfire was thought of, when RJ Mitchell was designing innovative flying boats, with ever faster capabilities, in order to compete in the famous Schneider Trophy contest which first began in 1913.

While researching, I discovered Loch Lomond Sea Planes, the only company, as far as I am aware, who offer flights to the public in the whole of the UK. I mentioned it to my husband, which sewed a seed in his memory, and he bought me a pleasure trip for my birthday. What a birthday present!

To say that I was excited is an understatement. We ‘checked in’ in the grounds of the Cameron House Hotel, a stately Victorian Castle on the banks of the Loch, popular for weddings. The pilot gave out safety instructions before we settled in our allotted seats, ten people including the pilot, and he taxied out into the more open waters of Loch Lomond.

‘We’ll gain speed and the nose will dip just before we lift off the surface of the water,’ he explained.

The take off was so smooth as we glided out, and the water’s spray beneath us gathered momentum until we were gracefully sweeping up into the sky above the mountains, the swell below us sending ripples to the  water’s edge. Hills, 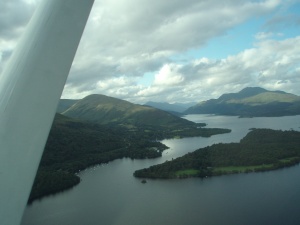 valleys, mountains, streams, all swathed in sunlight below us. Soon we were in sight of the Western Isles; Mull just visible in the far distance and the sun on its course to set above Islay ahead of us, before we banked and turned back across the highlands.

With the mountains to our left and the lowlands of Scotland in the distance we glided in a gentle descent towards the Loch and landed on the water as smoothly as if we were icing a cake. Magic!