Two weeks ago I was asked by the manager of Waterstones St Neots to drop by and it was a lovely sunny Market Day. The place was buzzing with life and I thought ‘what a nice place!’

On Saturday I left home in sleety snow. It was cold and not a day to be out and about but I’d planned to be back at Waterstones in St Neots  for a book signing event and so I arrived just before the appointed time of 11am. The staff had the posters ready and a seat and table arranged in a strategic spot, but we were not kidding ourselves that it was going to be busy. Time passed by quickly thanks to the people of St Neots and even though I only sold a handful of books that day, so many people  stopped by to have a chat about anything from writing to what they were reading at the moment, that  really I enjoyed myself. I drove away thinking what a pleasant bunch of folks live in St Neots!

When I was preparing for this trip I had phoned Radio Cambridgeshire to ask if they could mention the event on their show. I was surprised but extremely pleased to have a reply from Sue Dougan asking if I could go and talk with her on her show instead. It couldn’t be before the book signing unfortunately, but nevertheless I thought it was a great opportunity, so yesterday morning I drove over to Cambridge to arrive at midday, leaving plenty of time to find a parking space.

Sue immediately put me at my ease and the live broadcast was just like having a friendly chat. Although nervous at first, it was my second broadcast, since I was on BBC Radio Solent last autumn on the Katie Martin Show. Here is a link to the broadcast and it will be available for a week:

and here’s Sue Dougan in action in her studio: 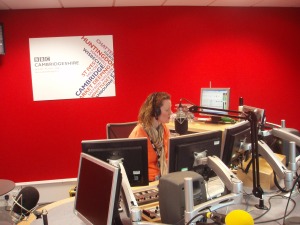 I left the studio feeling buoyant! As mentioned on the show I also planned to drop by at Waterstones in St Neot’s  on my way home for an hour or so and the people of St Neot’s yet again took time to stop and chat. Much to my surprise my cousin also dropped by too, so we finished the day having a cup of tea over looking to Great Ouse and having a catch up!