If TME Walsh in my last post was one end of the crime spectrum, the gritty end, Roderick Hart’s ‘Time to Talk’ is at the opposite. It is written like a memoir of someone setting up a psychotherapy business, written in the first person, and you are with the writer all the way as Max describes the less conventional way in which he decides to establish his practice and the unusual characters he meets. That is, until the law decides he is covering up involvement in serious crime. Here is a review for ‘Time to Talk‘ on Amazon:

“A Time to Talk is written in the style of a memoir and the voice is engaging, with a delightful turn

of phrase and an often original way with language. 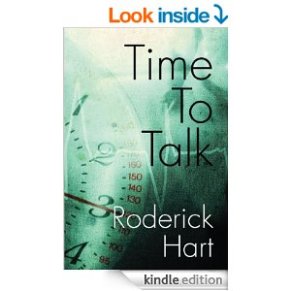 Time to Talk on Kindle

There is also a self-deprecating tone, which allows the reader to feel both sympathy with the narrator and mild exasperation as he flounders among the ‘slings and arrows’. Max Frei, a freelance counsellor with nothing but the good intentions with regard to his clients, finds himself in conflict with the law and in debates with not only experts in his own area, but criminals outside it. All of this is accompanied by his bewildered but happy reactions to his own love affair. The story is told at a gentle pace giving the Max plenty of time for introspection, while events unfold around him.

Within this story there is much debate about the serious subject of mental health and the treatments available, but all told with humour and insight that I found refreshing. It is rare to find such such serious debates tackled in such a light conversational tone and accompanied by laughter.

I wish Roderick Hart every success with this novel and look forward to reading other books by him in the future.

Roderick can be found on Goodreads and Linkedin