We were fortunate to be allocated passes to walk over the Queensferry Crossing over the Firth of Forth near Edinburgh last Sunday. Catching the train from Kinghorn and alighting at Inverkeithing, we had a short walk to Ferry Toll, where we were security checked and

bused to the bridge. The organisation was slick, cheerful and efficient and reminiscent of The Olympics (or The Commonwealth Games)

We were given only an hour to walk the 1.7 miles. This was perfect to include regular pauses to take photos and enjoy The Queensferry Crossing, the old Forth Road Bridge and The Forth Bridge, the iconic rail bridge admired by thousands over two centuries. 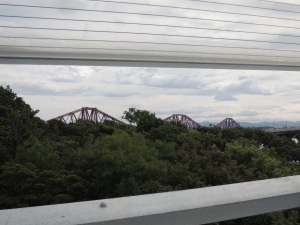 Here’s the rail bridge appearing Nessie – like through the gaps in the wind shielding glass; a photo which will never again be taken except from a moving vehicle.

and its construction and also historical background. On this one we were told that, whilst clearing the site, signs of the oldest dwellings in Scotland were discovered.

The views of the other bridges wowed us by their grace and symmetry.

The glimmers of sunlight through the clouds enhanced the beauty of The Queensferry Crossing itself. I couldn’t help but wonder, half way across, what Queen Margaret (or St Margaret (1045-1093) would have thought of it all, since she instigated the first ferry route for pilgrims over the Firth of Forth, which existed until the first road bridge was opened in 1964. 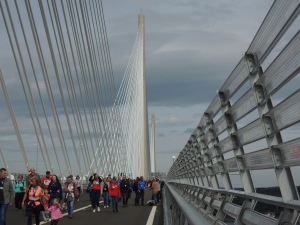 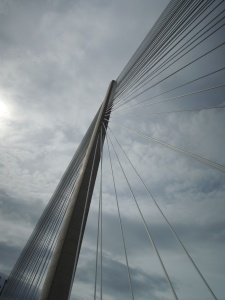