Author David Ebsworth takes up the ‘Throw a Dice Challenge!’

David Ebsworth’s latest and ninth novel is the final part of the Yale Trilogy about a 17th century nabob philanthropist and slave trader  Elihu Yale, but it is told through the eyes of Yale’s wife, Catherine. David was inspired to write the series when he came across a copy of Yale’s will, with the memorable line: “To my wicked wife…” And then, nothing. No bequest. Not even her name. 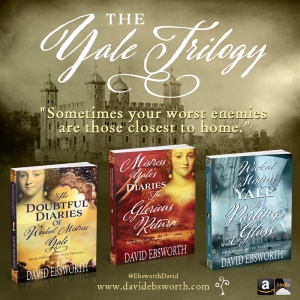 Tell us a bit about one of your characters David:

In the year 1728, Catherine Hynmers Yale is in her seventy-seventh year. She has wealth derived from her long association with the English East India Company and she has tragically outlived all but two of her nine children. Yet now she knows there are few days left to her.

What an exciting period in history David but very controversial in today’s world. Now can you reveal more about Catherine by sharing some of her memories?

We throw a dice. One is the most tragic or horrific memory to a six which is the most fantastic or beautiful memory:

One: The horrific death of her third-born, little Walter, at the East India Company’s outpost in Madras, and the endless nightmare that the babe may have been buried alive.

Two: The loss, when she was still a small girl, of all the family possessed – including her father’s coffee house in London’s Great Fire, and the destitution that followed.

Three: The multiple betrayals, in her later life, that led to her brutal incarceration in the Bethlem Hospital.

Four: Her joyous return, in 1689, to a London rebuilt, and her reunion with her family.

Five: The birth of her first-born in 1670, and the mantras taught to her by her Hindu friend and mentor, Sathiri – the power of which have served her through all her subsequent trials.

Six: After the comfort of her first marriage to Joseph Hynmers, and the disaster of her second to Elihu Yale, there has been the magic of the passion she once shared with Matthew Parrish.

Here’s More About the author and his writing

David Ebsworth was born in Liverpool but has lived in Wrexham, North Wales, for the past 40 years. He began writing full-time after he retired in 2008.

while the second, Mistress Yale’s Diaries, The Glorious Return, sees her back in London with her children during the 1690s and embroiled in all the turmoil and intrigue following the Glorious Revolution.

But now, the third and final part – Wicked Mistress Yale, The Parting Glass:1700 and East India Company Governor Elihu Yale is back in London, seemingly intent on reconciliation with his wife Catherine after ten years of separation. But those ten years have given her a taste of independence that she’s not ready to easily surrender. The ghosts of her previous life continue to haunt her, however – yet another former foe returned with her husband and seemingly is still intent on revenge. A more evil enemy still, in the shape of that Jacobite Colonel John Porter, who had caused such damage to her youngest daughter. Drawn back even further into espionage on behalf of her nation, Catherine must battle madness, her desires, the rifts in her family, riot, rebellion and assassination in this tumultuous third and final act of the Yale Trilogy.

I’m currently offering a free kindle copy of the first part, The Doubtful Diaries of Wicked Mistress Yale, to anybody who might be interested in reading it and, if they like it, possibly posting a short review on Amazon, Goodreads etc. All I need is their kindle e-mail address and to let me know whether they’re in the UK, USA, etc. But don’t worry about that bit if it’s a nuisance.

_Out now – Part Three of the Yale Trilogy.

Thanks for taking part in my ‘Dice of Memories Challenge’ David.

Diana Jackson is author of Mystery Inspired by History Series

the protagonist of her latest novel

rolls a dice to relive her memories.

7 responses to “Author David Ebsworth takes up the ‘Throw a Dice Challenge!’”