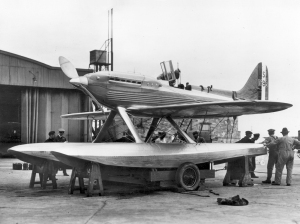 A bit of poetic licence here but what amazing motor launches these ‘Supermarines’ are. The Supermarine Swordfish certainly looks as if it could fly, or must feel like it anyway.  The Swordfish has certainly earned the name Supermarine, like it’s predecessor, the Supermarine S.6B which  won the Schneider Trophy outright back in 1931.

Bremont, a British firm who crafts pilot’s watches ‘to perfection’ has a Supermarine range.

Supermarine Rugby Club are recruiting now! Their website explains that the team started as a works team for Vickers Armstrong, who continued to make Spitfires when the Supermarine site in Woolston was bombed during WW2. Click on the link for a more detailed history.

Also keeping the tradition of Supermarine alive is The Swindon Supermarine Football Club suitably nicknamed The Marines, who are part of the Southern Division.

There’s The Supermarine Bowmen too, but I have not been able to find out why they took the name. Flight and skill certainly!

Back to the famous Spitfire there is even a factory which makes spare parts especially for these well loved aircraft, also called ‘Supermarine.’ A well eared name since without them we would not see such wonderful air displays and The Battle of Britain flight passed.

I was also excited to hear in the paper a couple of years ago that an Australian firm had taken on the name ‘Supermarine Aircraft‘ to ‘keep the name alive’ and are actually building reproduction Supermarine Spitfires!

If you know any I’ve missed, please let me know in the comments box. I’d love to hear from you, or by email diana@dianamaryjackson.co.uk.

100 years ago this October Supermarine was born

What does the name ‘Supermarine’ mean to you? The Spitfire? Nothing? An important company in Southampton’s history and later Swindon too? If you’re a football supporter to Swindon do you know what the connection is?

It meant little to me until my parents started looking into our family history and Dad began to speak of how important Supermarine was in our family when they lived in Woolston and once my interest is stirred I have a need to go and do some research. Why?

This satisfies the social historian in me….not an exact science of facts and figures but and exploration of real lives for real and imaginary people. So here’s the historical facts laced with my interpretation in italics:

In 1913 Pemberton Billing, often described as a maverick in political terms, approached a little known boat builders called White’s in Itchen Village on the banks of the River Itchen.

I can imagine the rumours in the village pub, The Yacht Tavern while negotiations too place with Hubert Scott Paine in his yacht moored up the river.

He wanted to use the skilled craftsmen to build flying boats and an agreement was made to begin production in October 1913.  Supermarine was not the official company name until 1916, but Billing registered the name for telegram purposes but also had the name emblazoned on the roof in November 1913.

I believe that the people of Itchen Ferry and Woolston would have been proud of the new developments and excited to see the newly developed flying boats take off from the river near where they lived and worked. 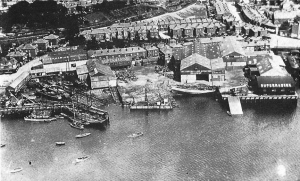 Why Supermarine? The main use of flying boats for the military at that time was to look out for submarines….sub..under the water…supermarine…over the water.

Why did he have the name painted on the roof? To be noticed from the air of course, especially to catch the attention of the military to be taken seriously and to gain orders and build business.

(For the family in my novel ‘Ancasta Guide me Swiftly Home’ living in Woolston, split from Itchen Ferry only by the Portsmouth Road, I reasoned that this could only be good news, since two of the characters in my novel Ernest and Jack already worked at White’s. It meant better job security and job prospects.)

Flying boats were important in WWI to protect convoys, search for submarines and also to bomb strategic sites, out in Turkey for example.  In WWI they also helped in rescue missions for crews of sinking ships. It was a innovative development for the navy with the newly opened RNAS station along Southampton Water at Calshot. With the first sea plane carriers also in operation during WWI technological development was moving fast.

Why were flying boats so important to us in Britain?

Firstly there was no infrastructure of runways before WWI. Planes just landed where they could on fields and park land so it was quite reassuring, us being an island, that the aircraft could land on water. This was important, not only to impress the military but commercial projects later on. In 1913 it was only 4 years since the first ever flight across the channel.

If entrepreneurs were to persuade the wealthy public to pay for air transport, it was thought that they would be happier that the craft could land safely on land or water.

Mitchel’s developmental work to such a high specification led on to the timely Spitfire. In the gallery of Solent Sky, the aviation museum in Southampton , there is an exhibit of small model aircraft right from those early sea planes to the Spitfire.

Many say that, if it hadn’t been for the development of the S6B, an amazing feat of engineering by Mitchel to develop the fastest amphibian aircraft in the world at that time, the technology would not have been in place to develop the Spitfire.

And so Supermarine was born one hundred years ago. It was a major employer in the area up until the second world war when Woolston’s Supermarine Works were bombed out, after the local people had been inspired by witnessing the first ever flights of the Spitfire right over their heads, including my father.

To me the facts are important, but it is the way in which I can weave lives of ordinary people through these facts that brings history to life.

I’m excited to announce that my events to celebrate three centenaries continue this October.

The birth of Supermarine in Woolston Southampton October 1913

I will be talking about my novels and my unusual interest in Supermarine and early flight, especially, flying boats and the role of women in WW1:

Then you can meet me, come and have a chat and even buy a signed copy of Ancasta for that special Christmas gift on

I look forward to seeing you at one of these events!

If you’d like more details then please drop me a line diana@dianamaryjackson.co.uk

I’d love to hear from you.