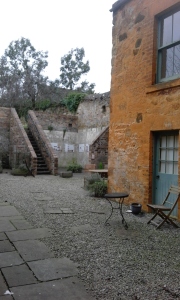 ‘Healing Paths of Fife’ in aid of Kirkcaldy Foodbank

Kirkcaldy at its best

My last post described the difficulties families are facing making ends meet in areas of Kirkcaldy but the Lang Toon is a place of two halves. There are areas of beautiful well kept stone family houses and terraces near the centre of Kirkcaldy and many points of rich cultural heritage including The Museum, library and art galleries, The Adam Smith Theatre and The Old Kirk which boasts of accomplished musical events to name but a few.

There are places being restored bringing back new life to the town centre including The Kings Theatre, The Olympic Arcade and the Merchant’s Quarter. See a previous post on my virtual tour of the Fife Coastal Path ~ Kirkcaldy. 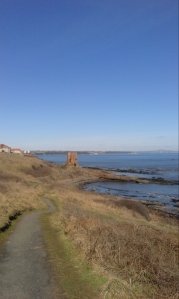 Seafield Tower and the Seals

There are lovely walks along the promenade, out to Seafield to watch the seals or a gentle stroll to The Harbourmaster’s House in Dysart not to mention the numerous well tended parks.

Maybe a bit controversial, but there is much new building around the outskirts of Kirkcaldy, changing the demographics of the area, all of which should bring more prosperity to the town and attract businesses to establish here. A linoleum factory has even been been restored and reopened, for example, due to the ‘green nature’ of its product, bringing much needed employment to this no so wee toon.

Projects who support local folks in need in Kirkcaldy

The Kirkcaldy Foodbank, sees itself as a last resource to ensure no person is left hungry in Kirkcaldy and the surrounding areas, but there are other places which give well needed support. Here are two of them. 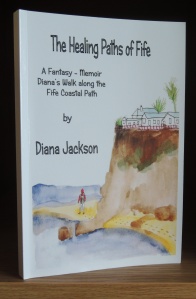 I have had wonderful feedback about this fantasy/memoir of mine, and so I ask you to spread the word. This is my way of giving back to a supportive community in our relocation to Fife. It is only £2.99 in the UK and $3.72 in the USA. If you’ve read it already then please spread the word. If not please buy it for a good cause and let me know what you think.

The Healing Paths of Fife ~ in Aid of Kirkcaldy Foodbank

Why Does The Kirkcaldy Foodbank Need Our Help?

I love living in Scotland, particularly in Fife, and yet I am increasingly aware of the inequalities in this region and have volunteered to make up food parcels for Kirkcaldy Foodbank for well over two years now. What I find most astounding is that the need is growing. Universal Credit, piloted in an area of high deprivation, has compounded the difficulties families and individuals are facing and the Foodbank is struggling to keep up with demand. Given no government funding they rely solely on generous donations of food and money.  This got me thinking:

What else can I do to Support Kirkcaldy Foodbank?

I decided that I could do more and so:

Here is a video which gives you glimpses of The Fife Coastal Path, the journey I walked on and the unusual folks from history who I met along the way and enjoyed a wee blether with.

The Healing Paths of Fife Video

“Kirkcaldy Children are the Poorest in Fife

I have had wonderful feedback about this fantasy/memoir of mine, and so I ask you to spread the word. It is only £2.99 in the UK and $3.72 in the USA. If you’ve read it already then please spread the word. If not please buy it for a good cause and let me know what you think.

A Birthday Party al fresco in the January Sunshine 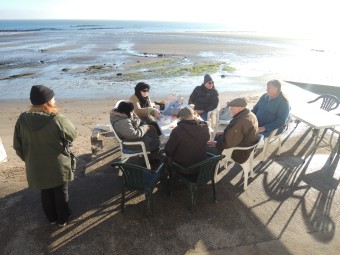 On Wednesday we went back to the roots of our Scottish adventure and our total change of life’s experience. A little bird told us that it was Moira’s birthday and though The Wee Shoppe is not usually open on a Wednesday there were whispers that there was going to be a wee celebration.

The Wee Shoppe will always have a special place in our hearts. It is where we were first welcomed into the Kinghorn community, made friends and learnt the joy of blethering.

This was a beautiful winter’s day (around freezing!), with the sun shining on Kinghorn Harbour, as we set out chairs and a table on the concrete hard in front of the Wee Shoppe. There were nine of us drinking tea, eating hot sausage rolls and birthday cake.

With everyone smiling and laughing it took me right back to those early days of 2014. Great memories. Lovely people. We are so grateful to be here! 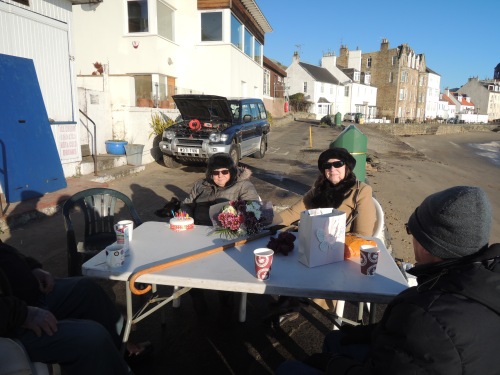 The Healing Paths of Fife tells our story in prose, poetry, fantasy and historical background and it was where I ‘met’ renowned author Nigel Tranter and he imparted some advice to me about the dangers of writing about a place I had only just discovered.