A Touching Review ~ Don’t forget to let authors know what you think!!

I received a timely email at the weekend and it gave me a bit of a confidence boost at a time when work has been so difficult that I’ve found it hard to concentrate on my writing. You know the times, when you feel so stressed that your brain feels befuddled and the usual garden therapy didn’t shift it either. Anyway this is what Sheila wrote:

Now, Sheila must have borrowed both ‘Riduna’ and ‘Ancasta Guide me Swiftly Home’ from Woolston Library and so I was even more touched that she took the trouble to write. It’s a good reminder to all of us. It doesn’t take two minutes to write, whether it’s on Amazon, Goodreads or through a personal email but it means a great deal to an author struggling for recognition. So, many thanks the Sheila, and others like her. You lifted my spirits and helped to put my brain back on tack!

In answer to Sheila’s question, realistically the third in the series will be out in will be 2014. I intend to do the bulk of the research in the next few months and start writing alongside. Meanwhile, my first murder mystery will be out hopefully by August….not part of the Riduna Series I know, but it does have links with the Channel Islands, so watch this space. Mind you, my husband wants me to have a bit of a break this summer too!

Do you always remember to let authors know that you enjoyed their novel or write a review? It means so much:-)

ps I received a tweet today. Another cheery response, only this time to Norman’s memoirs…’The Life and Demise of Norman Campbell.’ Only takes 30seconds to write if that:-)

Eventispress ~ Distribution of Ancasta and on line relaunch

Eventispress is publishing ‘The Riduna Series’ including my first novel:

And the second in the series:

If you click on each book it will take you to Amazon, but although the new version of Riduna is now in stock, Ancasta is still Temporarily out of stock.

As the author I am finding this very frustrating, because I have been told by customers that it has taken up to three weeks for Ancasta to arrive. I have been reassured by the distributors that there is no problem, but that the books are taking a long time to reach and be placed on the Amazon system, but that it should be rectified shortly.

My second frustration, as an author, is that someone is still supplying Amazon with copies of the original version of Riduna, even though I was assured that they were pulped. Please, please, please, buy the new version if you would like to. I get no royalties whatsoever now, for any of the ‘blue’ covered version, and selling it is against copyright, since Eventispress now have sole permission to print the novel.

Any enquiries can be sent directly to them at enquiries@eventispress.co.uk.  Both novels are:

~already available in some independent bookshops including Guernsey and Alderney

~can be ordered by bookshops through Gardners and Bertrams

~can be ordered in any bookshop in the UK

~ can be ordered for outside the UK through enquires@eventispress.co.uk

~can be ordered on line at Waterstones, Blackwells and many other on line book stores.

Ancasta should be available any day now but, due to these distribution difficulties,  my publicist has suggested an online relaunch date of

Memories of My ‘Bookiful’ Weekend

While the whole of the UK are experiencing Olympic withdrawal symptoms, I thought I’d share snapshots of memories of my own eventful weekend, last week. It was a marathon in itself! 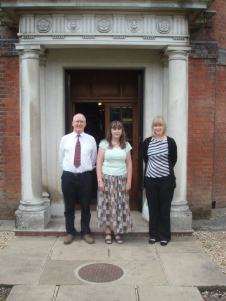 An atmospheric picnic, sharing readings and talking about my writing on Weston Shore as the sun set over Southampton. I was just reading the first chapter when Edward, a sea captain, guides his ship along Southampton Water as a cruise liner left dock and sailed past us! 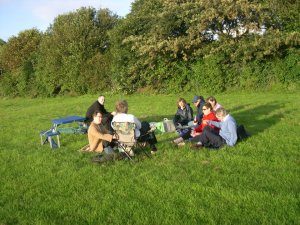 Excited to catch the Hythe Ferry. Although this was not a Hotspur as in both of my novels, I still delight in the journey across Southampton Water, evoking many childhood memories, especially taking the train ride along the pier. Spot my poster on the train behind my head! 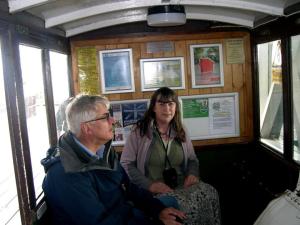 Then with Colin and at the Herald Office, Hythe: 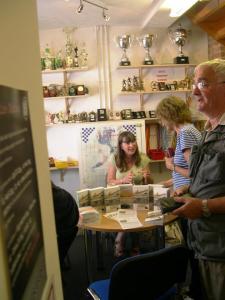 And on to the Spinnaker Bar Calshot. It was a memorable Day, meeting interesting people along the way.

Back to Bedfordshire and on to the Shuttleworth Collection where so many people stopped by to listen and also share their own fascinating tale.

Finally relaxing and watching the air display with friends and family. A great day was enjoyed by all to complete my ‘Bookiful’ Weekend!!