Many thanks to Morgen Bailey for this on line interview! Hope to see some of you on Thursday 3rd in Waterstones Hitchin, Saturday 5th at the Luton Book Festival or on 12th back down in Southampton Waterstones West Quay!

Morgen 'with an E' Bailey

Complementing my interviews, today’s Author Spotlight, the three hundred and thirty-fifth, is of historical novelist Diana Jackson. See below for Diana’s book signing events! If you would like to take part in an author spotlight, take a look at author-spotlights.

Diana Jackson has spent most of her career teaching English in the heart of England, but she has been writing all her life. Lucky to have an inspirational English teacher in her teens, a person who would continue to be a perfect role model in later life, Diana was encouraged to write poems and short stories. She graduated with a degree in education before training as a middle school teacher, where she motivated youngsters with her enthusiasm in the power of language.

Next Diana gained experience teaching English as a Second Language both in the UK and abroad, giving her a rich experience of life and cultures…

To mark the week up to a series of live events, the first of which being at Waterstones in Hitchin on Thursday 3rd October where I’ll be giving a talk, take part in a discussion and be available to sign copies of Ancasta (details in my last blog post) here is a post where I was interviewed online by TME Walsh earlier in the year. Thanks Tania. I enjoyed being your guest.

Today I have the pleasure in posting an interview conducted recently with author Diana Jackson.

Here she talks about her book ‘Ancasta: Guide me Swiftly Home’, the sequel to ‘Riduna’, the research involved and what inspired her to write in specific time periods.

1) Please tell us about your book, Ancasta: Guide me Swiftly Home.

Ancasta takes the family from Riduna my first novel, on to the next generation. The novel begins in Woolston, Southampton in 1910 and takes us through the Great War, but it’s an unusual story. We witness first-hand the early flight of flying boats which changed the lives and economy of the local people, especially the women whose perspective of life is altered forever. Ancasta means ‘The Swift One,’ and is allegedly the Anglo Roman Goddess of the River Itchen. There is a sense of prayer through the ages as my characters, like the Roman’s before them, looked out…

I have some good news!

I’m back on the road again to celebrate three centenaries in my novel: 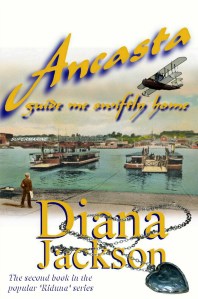 I wrote about the first centenary, RNAS Calshot in March 1913, in my last post and so to celebrate a year of centenaries leading into 2014 and the big event to commemorate the Great War I have organised various events and these are the ones confirmed so far:

I am really pleased to launch my tour at the very heart of my novel, where the story began on the banks of the River Itchen:

Then I will be popping in to say hello at The Yacht Tavern, Woolston to have a chat, answer questions and sign copies:

(dependent on the football traffic!)

The following week I am at St Neots, closer to home, where the history of aviation is hugely important, with Duxford and Shuttleworth not far away:

Then in October I will be even closer to home in Hitchen, but this time I will be giving a talk in the evening about my novels and how the history of aviation, early flying boats, Supermarine, sea planes and sea plane carriers into WW1 influenced my writing. With Shuttleworth just up the road, it should be a good night. Refreshments available!

Then I will conclude my tour back in Southampton, where it all began!

More venues in the pipeline to be confirmed.