As we explore Bedfordshire together as part of my murder mystery virtual tour we will pause a while at The Shuttleworth Collection, a place that influenced my second novel ‘Ancasta – Guide me Swiftly Home’ and also features in my third novel ‘Murder, now and then.’ The museum is a comprehensive collection of aircraft including a few of the oldest airworthy crafts of their type. My interest has always been to imagine the places where these planes were built and the people who crafted them, as well as the live of those who originally flew them. 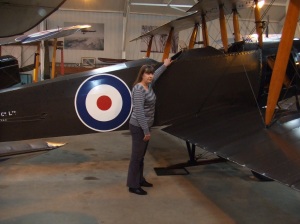 For example, on one visit an engineer pointed out the unique stitching on the wings of the Edwardian aircraft, often carried out by women during WW1.

I have spent many happy hours researching at the Shuttleworth archives under the guidance of John and Jim and I am indebted to their support. Research for an author can be a lonely business, but it is wonderful when people take a genuine interest and give of their time to ensure that the facts gleaned and expanded upon in a novel are authentic.

Shuttleworth is unique in that almost all the aircraft on display are airworthy. There are also exaples of ‘work in progress’ which you can visit in Hanger 1 including the long awaited Spitfire and the De Havilland Comet DH88 which has flown for the first time again since restoration this year and an excellent site it was too.

Here is an account I wrote back in 2012 of an airshow I enjoyed when the Blackburn Monoplane gave her centenary flight from Shuttleworth:

“Last Sunday (7th October 2012) there was a buzz at the Shuttleworth Air Day. Attendance to the show was high, the mood buoyant and we milled around with anticipation as we waited for the display to start.  I did a double take when several pipers, resplendent in their kilts, walked towards us but no, we were still in the heart of Bedfordshire and the Bedford Pipers were to perform for us. The sun shone and folks smiled.

The focus of the day was a Fast Jet Reunion and those watching were certainly not disappointed as the Folland Red Gnats did acrobats in the sky (Hey, I know where they were probably made…. we saw one outside Follands in Hamble near Southampton!) There were others including the Vampire Trainer (Can anyone tell me why it’s called a Vampire?)  and the Hawker Hunter. (1955) As well as the Jets there was the Hawker Demon, 1933, and the Hawker Hind, 1934. (My elderly 103 yr old friend Norman worked at Hawkers back in the 30’s so I felt a connection)

Then we arrived at the part of the show which truly interested me, the World War One planes. I have read about Tommy Sopwith and what a character he was, and then there was the SE5a which features in my novel ‘Ancasta.’ The sun was sinking fast but it was a still evening and so we were filled with hope that the old Edwardians would be able to fly. Our wait was rewarded with the Bristol Boxkite, (although I believe this is a replica) also featured in my novel and the Avro Triplane. I never tire of watching these priceless machines take to the skies. 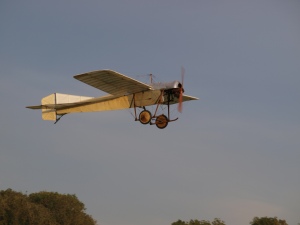 For me though, the climax of the day was watching the Blackburn Type D Monoplane, (Impressed… I copied this carefully from the programme) the oldest British plane which can still fly, take off on its 100th birthday. It first flew in December 1912 and Richard Shuttleworth found it in a barn of hay in 1937, before he bought it and had it restored. Thus, on Sunday The Shuttleworth Collection yet again treated us to a precious celebration of history come to life before our eyes!

As we were walking back through the remaining cars to go home I remarked on a lovely e type Jaguar.

‘That’s scary,’ my husband said. ‘You are recognising cars now.’

‘Oh,’ I said. ‘Do you know there are three things you’ve taught me since we’ve been together?’

‘What are those?’ he asked, puffing up proudly in a way only men can.

‘Cars, aeroplanes and how to swear!’ I replied.

Nevertheless it was another memorable flying day at Shuttleworth and as the announcer exclaimed at one point over the loud speaker,

‘We have to thank the RSPB for this unscheduled part of the show,’ as a flock of ducks flew in V formation overhead! “

Shuttleworth plays only a small part in ‘Murder, now and then’ but the museum is certainly a gem in the heart of Bedfordshire and watching an airshow for me is akin to discovering an antique diamond!

To Kindle or not to Kindle – What changed my mind?

This week my debut novel ‘Riduna’ has been launched on Kindle.

After my last post on Kindle ‘ Can you snuggle in bed with a Kindle?’ I had such fun reading the responses, but why have I changed my mind – or have I?

I have agreed for ‘Riduna’ to go on Kindle because:

Riduna is the Roman name for Alderney, Channel Islands, UK and the novel is set in late Victorian times. If you like social history and enjoy a good saga then click on the link below:

The Ripple Effect – Marketing your novel – a personal experience

I make no apology for using this analogy, even though it’s a bit of a cliché.

A good friend, ex publisher and bookshop owner once said on hearing that my first novel ‘Riduna’ had been published, ‘Now your hard work begins.’ He was not referring to starting the next novel and since I’d sighed with relief when the proof reading and editing phase was finally over, which I considered the hardest work of all, I asked him what he meant.

‘You need to get out there, talk to people and make things happen,’ he said. ‘It’s up to you as a new author. You can sit back and wait and see, but there is a limit to what the publisher can actually do at this stage.’

Still puzzled I replied, ‘That’s their job, isn’t it. All that publicity and stuff.’

‘Oh no,’ he said. ‘If you think like that you’ll get nowhere.’ After that he gave me a list of tasks to do and I must say that it was a bit daunting at first.

With that list, getting quite excited I added some of my own. Since Riduna was based on Alderney and Guernsey and was historical romantic fiction and a good holiday read, we spent time dropping leaflets and bookmarks at hotels and visiting museums too.  Through this and my friend’s help I made good contact with several bookshops, held three successful book signings and was asked to talk at Bedford library. News reached the Alderney press, the Guernsey Press and the Luton News.

Now here is where the ripple effect started. Later I was contacted by Flitwick library and more recently Stotfold Library have also booked me for a slot, then out of the blue I had a phone call from a ladies group who was given my name by the library. The ripple effect.

Since I was focussed wholeheartedly on selling books through bookshops, my helpful website designer remarked,

‘You should try going on Twitter and Facebook or writing your own blog.’ This has rippled to being asked to be a guest blogger on sites like ‘Visit Guernsey’ and ‘Novel Publicity’. You will find that the more you are willing to give of yourself the more others are likely to support you. In fact Twitter is one continuous ripple as tweets are retweeted as you build up trust with your followers.

Well, the rest is history and the ripple effect now has far reaching and unforeseen contacts (and friends) over the globe. Not only that but I have the satisfaction of readers telling me almost immediately what they think when they read ‘Riduna.’ Amazing.

Have you any more marketing tips for new authors on the block to share or personal examples of The Ripple Effect?