Introducing Dawn Singh ~An Author and the Inspiration Behind 2016 UKIndieLitfest 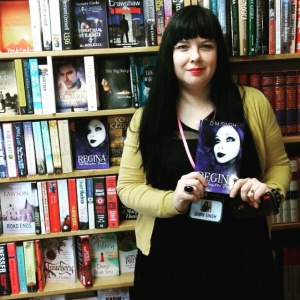 About Dawn Today I’m pleased to introduce Dawn Singh, a writer and Indie Publisher from West Yorkshire and CEO of FollowThisPublishing. The 2016 UKIndieLitfest is Dawn’s brain child but she has a day job and family too, so she appears to be one of those superwomen who never stops.

Her writing genre is Paranormal Fantasy leaning towards a Young Adult readership and the first book in her trilogy, Regina, The Monster Inside was published in the summer of 2014 which is available as a paperback and on Kindle.

Here is the blurb for the novel which certainly draws you in: 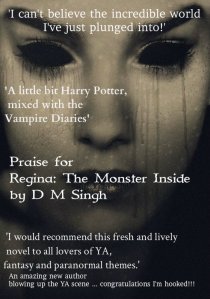 What if what you were could destroy everything and everyone you loved?
Regina thought she was an average teenager. When strange things start to happen, she discovers she belongs to a hidden world of supernatural beings and she is the most dangerous of them all.
Her existence is a death sentence to her, her survival could be a death sentence for us all.

Dawn has known from a very early age that she wanted to be a writer and is led by moments of inspiration, out of which her characters are born. 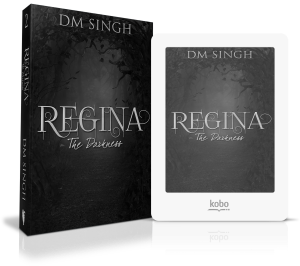 And Next Dawn promises us The Darkness, the next in The Regina series.

I look forward to meeting Dawn at the first UK Indie Literary Festival. More details and where you can register for free tickets for this event:

Today I have a guest writer on my blog. Tania writes quite different books to my current Riduna Series but, since I’m hoping to

have my first Murder Mystery published this summer, it’s great to interview her and hear about her next novel, especially since it is set over the border in Hertfordshire, where I grew up.

A big welcome to Tania Walsh!

1. What is the working title of your next book?

2. Can you briefly describe what the book is about?

Set in present day Hertfordshire, DCI Claire Winters of Haverbridge CID, is sent on the trail of a killer who, with a greater purpose in mind, always intended murder to be the very last resort.
Until now, Claire always thought she was untouchable, but that was until she came under the spotlight of a sinister breed of serial killer. A seemingly average man with a twisted view between right and wrong, with a hellish past that wasn’t quite finished with him.
Claire thinks it’s nothing she can’t handle, but this arrogance will make her a target that could cost more lives, including her own.

3. Where did the idea come from for the book?

I was inspired by a walk around my local park one icy morning in January 2011. I was out with my daughter and making a mental note of my surroundings. Everything was so bleak and created such a creepy atmosphere, that it triggered some ideas for a story. That was the initial catalyst.

4. What genre does your book fall under?

5. If your novel was brought to the big screen, who would play the parts of the main character’s?

This is very hard for me to pinpoint. For the role of DCI Claire Winters it would be someone similar to Amanda Redman but younger.

The ‘baddie’ in this particular book could be played by David Oakes.

6. Will your book be self-published or represented by an agency?

I’m hoping for the traditional route. The manuscript has been requested twice on an exclusive basis. I’m still waiting to hear back from one person but the first person to request the MS gave a lot of praise but recommended a trim of the word count, and then they’d be happy to take another look at it. I’m definitely taking their advice!

7. How long did it take you to write the first draft of the manuscript?

The first draft took just under a year. I started in February 2011 and it wasn’t until June 2012 that it was at the standard to stand a good chance of getting noticed amongst the thousands of other submissions that land on publishers and agents desks every day.

8. What other books would you compare this story to within your genre?

I don’t think I can compare the story itself to anything that I’ve read, but in terms of who might enjoy the book, I’d say readers of S. J. Bolton and Minette Walters would find it of interest.

9. Who or what inspired you to write this book?

It’s hard to pin point just what inspired this book as a whole. That cold day in my local park inspired the time of year the novel is set, so I guess you could say inspiration came from a cold winter’s day.

10. What else about the book might pique the reader’s interest?

With this book, I wanted to write something bleak with a serial killer you could (almost) feel a sense of normality with – maybe even forget what they’re doing and actually ‘like’ them to a point. It’s a scary thought and something I wanted to explore.

As an avid reader of crime/thrillers, I find complex killers interesting in fiction and I hope future readers will want to engage with this character.

Long term, over further novels, I hope readers will want to read about DCI Claire Winters. She’s very ‘human’. She has a lot of bravado in a very male dominated environment but at the same time, she has some deep-routed insecurities. I hope to expand the character over a series and hope readers will relate to her on her journey.

11. Please tell us briefly about your other works.

The first DCI Winters book ‘For All Our Sins’, was published in paperback in 2011, but the rights have now reverted back to me so I have taken the opportunity to re-work parts of it. I’m in the final stages of corrections before it will be released on Kindle but I will be sending out submissions the traditional way as well.

12. What advice you would give to fellow authors?

Above all, persevere. It sounds clichéd, but the best sellers didn’t become published by giving up.

The next piece of advice is stay grounded. Don’t be pretentious and think you’re book is the next best seller. Publishers and agents aren’t just buying into your book; they’re also ‘investing’ in you as a person. They need to see that you are ‘marketable’ and have the ability to sell your work through public appearances. There’s nothing more off putting than arrogance. As writers, we can always improve and refine our craft.

Many thanks to Tania for that useful advice as well as giving us a fantastic flavour of her next novel. If you’d like to follow Tania’s progress then here is a link to her blog  www.tmewalsh.wordpress.com/ and I wish her good luck with her writing!