The Story of Nellie Rault’s Grave ~ Lives on!!! 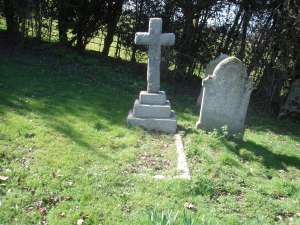 Nellie Rault’s unsolved murder back in 1919, one hundred years ago, inspired my murder mystery Murder Now and Then set in two time zones, 1919 and 2019.  As I explained in my talk the other day, Nellie continues to haunt me in various ways with unsolved mysteries today including a strange email from the Luton Paranormal Society!  When I first found her grave in St Mary’s churchyard Haynes, Bedfordshire, her cross was at such a precarious angle, it looked as if she was trying to get out. If you look closely at this photo the horizon is not horizontal ~ the ground is actually flat and not sloping at all ~ I’ve turned the camera off kilter!

When a friend of mine went looking for Nellie’s grave a couple of months back, to his dismay the cross has fallen over altogether. After asking me if I’d be interested in helping to raise the money to restore it, which I immediately said yes to, he wrote to the parish council. He had a nice email back saying that, because it is a Commonweath War Grave from WW1, the commission would visit and lay the stone flat on the ground. 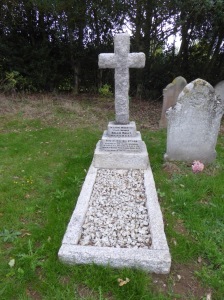 in the night and that the Parish Council had no idea who the benefactor was. I promise it wasn’t me but nevertheless I’m pleased it is restored so well. Above is a photo of the grave is in all its glory! The ground is flat as you can see.

Murder Now and Then can be ordered from Waterstones or bought from Amazon. 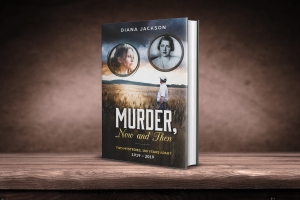 Filed under Murder Now and Then, Virtual Tour of Bedfordshire

The Novel Approach to Research ~ Do you know what car this is?

What inspires you to write a novel?

All it took for me was an email and a photo and I was hooked. 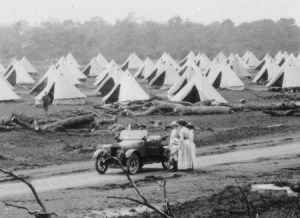 And here’s the gist of the email:

‘Did you know that a young Jersey girl was murdered at Haynes Park, near to where you live, back in 1919? The murder was never solved.’

The inspiration to write my first murder mystery ‘Murder, Now and Then’ was born!

Inspired to delve deeper I discovered this photo at the Bedford archives. The young ladies quickly became my characters, as did the owner and driver of the car – but what was the car?

I needed a car which looked like the above and was manufactured before World War One. Searching on the internet and asking several people for their opinion we decided to call it an ‘Austin 7hp.’

Imagine my surprise and delight to receive a comment on Facebook yesterday morning from a friend @PaulFellows who informed me that the car was really a Morris Oxford or Morris Cowley.

Many apologies for car lovers for this error in my novel. Not that you would know of course since there are no pictures in ‘Murder, Now and Then’ Morris;-)

Filed under Murder Now and Then, Research

We attended the Haynes 100 this year as spectators for the first time, after several years of taking my hubby’s car. (which we did try to sell last autumn but it was not to be – probably too late in the season – but is in dry dock just to fix a little something – I’m not really sure what but I try to nod in the right places)

It did not disappoint and there was an abundance of people, cars, stalls and displays. It was a truly a village fair and more. The event is so well organised. Army cadets arrange the parking and the procession of cars, which go twice around the village. The cars are arranged in years, trying to cover each year for the last 100. This makes it a bit quirky.

There were lots of oohs and ahhs over this one – a Rohan Atkinson’s car lookalike from Mclaren: 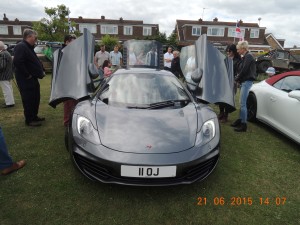 .. but these vintage old ladies earned many respectful looks of admiration at the other extreme: 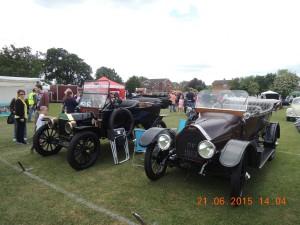 I love reading the little stories attached. There was one car owned since the 1960’s, bought with a reluctant  £70 loan from the bank. Fifty five years later the humorous comment was that the bankers posh car would have long rusted away – a pretty good investment, I should think.

The owners are passionate about their cars and puff with pride. There are the quirky ones which make me smile: 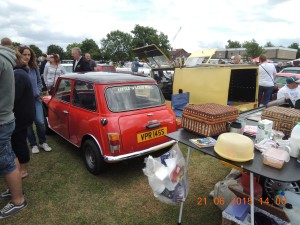 Did you know minis where once produces with a trailer including a sink and burner for brewing a cuppa! Very English!

And the tiniest camper I’ve ever seen: 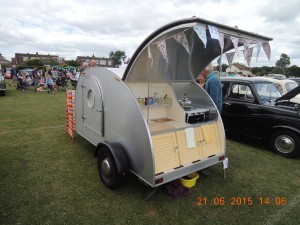 And finally a photo of our old dear, a Mark 2 which features in my murder mystery, Murder, Now and Then. She will have to go now my hubby has retired – we know that, but we’ll just enjoy it a couple of months more maybe. Isn’t she lovely. 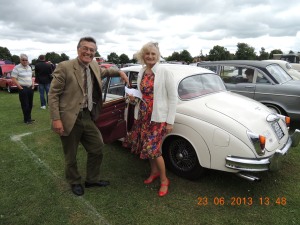 Filed under Bedfordshire, Murder Now and Then