Tag Archives: Settings for a novel

WHY IMAGINARY LOCATIONS ARE CHOSEN?

There are many reasons why an author may choose to write in an imaginary setting rather than in a real location. Here are a few of them. Do let us know if you can think of others.

To Avoid Association with Crime

Agatha Christie was the mistress of creativity when it came to imaginary villages where her crimes too place. She did not wish the reader to associate her murderers and criminals with real villages. Brackhampton and  Chipping Cleghorn to name but two of her places; names close enough to their Cotswolds equivalence in order to conjure a picture in the reader’s mind.

To Deter Literary Tourists from Snooping

Alexander Mc Call Smith successful ’44 Scotland Street’ series is set in Edinburgh but many settings within the novel are fictional.

In Book trails, an interesting site to check up on if you re investigating an area for its literary connections, tells us:
“Although Scotland Street is real and can indeed be visited (as we did) no.44 not surprisingly is fictional due to the risk of people, readers etc knocking on the door.”

The writer was able to locate a possible cafe which could well be the one that Big Lou’s Coffee Shop is based on (but maybe not!)

Very considerate and essential I should think.

An Allegory or Hidden Message

In John Bunyan’s Pilgrim’s Progress in which, I’m sure you know, Christian is on a journey towards the Celestial City. It is an allegory of life as he faces trials and tribulations on the way towards death; Christian’s ultimate goal of heaven.

Fantasy novels are usually in fantasy settings, but not always!

Emerald City, which is pure fantasy, became a successful TV series. It is known and loved by children and adults alike telling, of course, of the stories of the wonderful Land of Oz.

Wikipedia have a page on Imaginary settings for novels. It’s quite an interesting list.

WHY REAL LOCATIONS ARE CHOSEN

To Associate with a Famous Landmark or Place

When I think of classical fiction set in London, immediately my mind turns to Charles Dickens; for Bath I think of Jane Austen and for Dorset my thoughts turn to the rolling fields of Thomas Hardy country. This list could go on and I’m sure in other parts of the world you could add some well known authors and places. 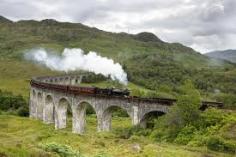 More recently, which novels have an instant association with the Glenfinnan Viaduct?

Hogwarts and Harry Potter of course!

Under normal circumstances this particular landmark has become a victim of its own success and usually, in the height of the summer it is almost impossible to park there. To ensure you are able to see the famous steam train going over, I recommend getting there early before the coaches arrive and choose your spot to stand.

In answering whether all of Maeve Binchy’s books were located in Dublin she replied:

“Not all; but I set many of my books in Dublin because I am very familiar with the place and I know the nuances and lights and shade of the city.”

To Associate with a Less Familiar Location

Peter May’s haunting mysteries are set in the Outer Hebrides; Uist, Barra, Lewis and Harris. Although, I should think, his novels are very popular reading matter for islanders, they are certainly well read worldwide.

Author Anne Allen has chosen to set all of her novels on the island of Guernsey. She has a captive audience (normally) of tourists and folks who have visited to island in the past but also those who have family associations with Guernsey.

My Riduna series stem from the island of Alderney and my mysteries are set mainly in Bedfordshire, although in

MISSING, Past and Present the actual town and village are fictional to protect the location of the empty house which inspired the novel.

Needs to be location specific to be credible, unless it included fantasy elements.

In a New Author’s Own Area

There is something appealing about trying out a new author who lives close by and has written in your shared locality. See Maeve Binchy’s comment above.

‘Write what is familiar,’ is the mantra, especially as a new author.

Many authors write in familiar locations local to where they live by:

Whichever you decide, some authors put maps in the front of their novels. Do you think this is a good idea?

We have visited the

Tagged as choosing a location, Imaginary settings, planning a novel, Settings for a novel, writing tips