Noah Enterprise Luton, Bedfordshire ~ Such Great Need and an Inspiration for my novel

NOAH ONE SHOULD BE LEFT OUT IN THE COLD 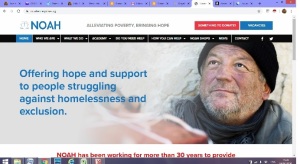 Many years ago when I was going through a breakdown of my marriage I began to volunteer at Noah Enterprise Soup Kitchen in Luton. What impressed me most about this welfare centre was that it was so much more than a soup kitchen. At the time, back in 2003, the kitchen was run like clockwork by two Irish sisters. They were wonderfully understanding that I was quite fragile and so at first I only washed up in the background. Then, as my confidence grew, I began to serve at the hatch, enjoying the banter with the clients, and finally I was trusted to go and clear the tables alongside and intermingling with everyone.

The sisters were probably in their late fifties at the time but their sense of humour and their efficiency running the kitchen lived with me over the years and in MISSING Past and Present, the two Irish sisters who ran The Ark, a centre in an imaginary town of Drumford had similarities to my memories, only Orla and Laura had just left college. It was Dorothy, my protagonist, who was homeless, but she still had her pride as this extract shows:

“Her sister’s name was Orla. It was easy to tell the difference because, although both had gingery blonde hair, Laura’s was cropped short around her oval face whereas Orla’s locks were long and plaited. The overall effect was similar with their delicately freckled features shining through.

‘What would you like today?’ winked Laura. How about this sexy black number?’ she asked as she held a sturdy black sweatshirt towards me. ‘There’s even some glamorous troos to match.’ The twinkle in her eyes rested on the leggings in her other hand.

I smiled, my eyes drifting to the floor. It was touching the way they were both sensitive to my shyness. Given an hour or so I would open up a little, but I found company a trifle hard to handle these days, after my imposed solitude.”

As at Noah, my fictional welfare centre provides far more than hot food; there’s a place of shelter to stay too. It is a place for the lost and vulnerable; for the homeless to take refuge, even if for a short period of time.

If you’d like to donate or volunteer at Noah in Luton, and I can assure you that the organisation and the place, not to mention the need are real, and not figments of my imagination, then please click on this link.

As the website says, you can donate more than just money ~ food, furniture and clothes are also vital for their work.

You could always volunteer at a place near you if you are able to, even during the pandemic. I know that in my short experience of a couple of years I gained far more than I gave. It was a pleasure!

Filed under Bedfordshire, Events, MISSING Past and Present, Planning a novel