Firstly, I have been overwhelmed by gratitude and pleasure by this event and want to thank all the students who have submitted covers, those who tried but did not submit, all those folks in college including their tutor Ben, my Facebook friends and readers and twitter followers who have entered wholeheartedly into the spirit of this event!

There was such a wonderful buzz with helpful feedback, comments and opinions, sometimes quite heated, for this cover competition by students at North Herts College, Hitchen. After that I spent a good while discussing each cover with several of the Ampthill Writers’ Group face-to-face at the new Costa Coffee and the church Soup lunch, my editor, proof reader, family and finally I had the results from the college on line vote too. The final decision wasn’t easy and in the end I will not please everyone but I think you will all agree that the students are the heros here for allowing their work to be discussed so publicly!

Here is a summary of feedback: 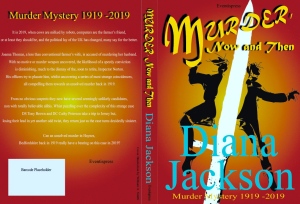 Facebook lots of positive opinion, likes and useful comments too. Here is my  feedback:

“Well done for completing a wrap around cover. The designer clearly followed the specification quite carefully. It was the men particularly who liked this cover best of all on Facebook and with my readers it gained equal votes to Cover B. They liked the vibrant, eye catching colours and the retro style, in keeping with a murder mystery. My writers’ group made some useful pointers for amendments which would need to be made but suggested that it would stand out on Kindle. This cover won my readers’ vote by a small margin.”

Facebook Many liked this best of all and there were lots of favourable comments too with helpful hints for amendments which could improve it.

Here’s my feedback to the student:

“Immediately I saw this cover it made me smile because I thought how cleverly the designer had interpreted the specification and made an image I felt was intriguing and eye catching. Feedback from my readers caused a great deal of discussion verging on being controversial, which I think is a good thing! Some loved it including myself, especially the puzzle aspect and the spy glass. There were some valuable points made though, and if the designer is willing and able to spend some time working with me to improve her cover I feel that it could be a winner.

It certainly won the college vote and I congratulate the student for her unique design.”

Facebook Likes, equal to A and B and a lot of favourable feedback. Here’s mine:

“There was excellent feedback from several of my readers who backed it as the best cover for its simplicity and shelf appeal, fitting for a murder mystery in today’s market. My writers’ group felt that, though they liked it, the historical significance of the shape of the cross being German in WW1 rather than English was not in keeping with the theme of this particular novel, although the designer was not to know this since she had not been given the opportunity to read the manuscript. I would like to thank the student for her proposal and congratulate her that the feedback from many I asked was extremely positive and she should be proud of her work.”

I have to hold my hand up here and admit that I had no intention of using this cover, which I designed myself to give the students some idea of what I needed them to achieve. I thank you for the positive and flattering response although I feel that it is mainly due to the fact that it is complete in every way, rather than for the design. When I looked at it on a Smart Board with the students we felt that there was too much plain brown and for an e book cover one student aptly commented that, ‘it looked like a bible.’

There was a late entry that I would like to acknowledge here because I feel that the designer has worked hard to produce something a bit different. I discussed it with close friends, family and members of my writers’ group unfortunately after my Facebook event. I felt that it was a very clever cover and I have seen a similar style used recently.

Here is my feedback to the student:

“I thank the student for entering their proposed book cover and it was looked at and discussed by my writers group, all of whom liked the formal lettering, clean lines and thought that it was a balanced overall look with a photograph which could be relevant for a novel set in a stately home or country manor. Overall it was felt that the cover was designed in a style more appropriate for non-fiction but that it was a commendable book cover nevertheless. “

At the end of the week I must admit that my head buzzed on the verge of aching with the decision I had to make. I could not please everyone and so this is what I decided:

I am going to launch cover A, the orange  one, for the book on Kindle because it is bright, eye catching and fun, with colours and images both sinister and speaking of danger. The designer has agreed to carry out some small amendments and complete the design and I will share it with you when it is finished, asking permission to mention his name too. I have asked if he would complete the paperback cover too and I will hold it for possible future use, but intend to use it for some of my posters.

I am going to launch an amended version of Cover B for the paperback version. I was told after this decision that the designer made the images in 3D and so I am in awe that she is unphased by the changes I have suggested and we are now working together on amending the design which will incorporate much of your feedback. I will share it with you when it is complete.

Congratulations to both of these designers and all those who have taken part in their first ‘real’ work experience in art and design. The final publication date for ‘Murder, Now and Then’  will be when all is complete but fingers crossed it will be in April!

A while back I was approached by a tutor from North Herts College in Hitchin,

not far from where I live. He explained that they were always looking out for opportunities for their students to carry out real projects for local businesses and what did I think of putting forward my book cover as such a project which they could volunteer for.

This idea made me quite excited since I worked in further education for nearly fourteen years until last July and know how important it is for their learning to be embedded in realistic work experience, in order to make their studies meaningful.

I was quite nostalgic to be back in college talking to students as I outlined the specifications required and offered to answer any queries by email. This would give the students an opportunity to learn how to set up a book cover both for an e book and a wrap around cover for a paperback and to follow  the guidelines given, but it also allowed personal interpretation and imagination.

I know from their tutor and emails I’ve received that many have made an attempt, and this experience in itself will not be wasted. I am not surprised however, that only a few have completed the task and submitted their final ideas. To make the challenge more fun we have agreed that there will be a vote held in various places on line; on the college Facebook Page, on Google+, on my Facebook Page and here on my blog. Added to this I will have feedback from my writers’ group, and colleagues and friends not on Facebook. Yes, people like that do still exist. All of the results will be brought together and a winner finally chosen to be announced on 17th March 2014.

I am impressed by the varied submissions so far and look forward to sharing them with you.

For the successful designer this will only be the beginning. Once chosen they will then work with me remotely over the following two weeks to carry out any alterations required and polish it to the format and standard for publication, just as any book cover designer would.

Whatever the final outcome, I would like to give a heartfelt thanks to all the students who have participated and especially to Ben their tutor for his strength to motivate and inspire, especially when you realise that this is added to, and not a part of their day to day coursework.

Tomorrow I will be putting the submitted designs here for you to have a look at. I will be truly grateful for your opinions and any encouragement you can give to the students for their hard work.

Filed under Murder Now and Then, Publishing your novel