Virtual Tour beyond the Solent no 11 ~ Alderney and Competition!!! 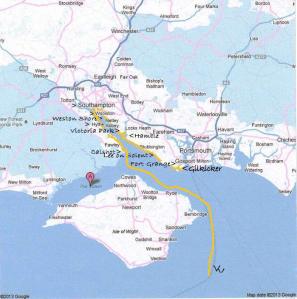 On the way to Alderney 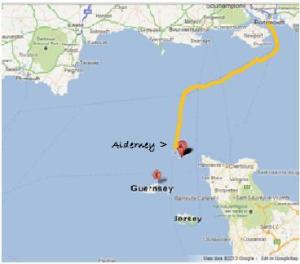 As most people who know me realise, Alderney is my most favourite place in the world and it’s where my story began. The reason my virtual tour goes straight from Calshot to Alderney is because it is the closest Channel Island to the mainland, and the closest to France too! The easiest way to get thereis by their own Aurigny islander plane, unless you are a sailor with a yacht! (This might change though, since there are rumours of a more regular ferry service on its way)

It was on Alderney where I made the decision to write my first novel ‘Riduna,’ allegedly the Roman name for the island, inspired by my Great Grandmother who was born there in the middle of the 19th Century. The ferries used to leave Southampton from what people now know as Ccean Village Marina opposite Woolston on the River Itchen and would have travelled past Weston Shore, the Royal Victoria Hospital and Calshot Castle before meeting the Solent. There they would almost certainly have headed east around the coast of the Isle of Wight and then on across the Channel. I travelled that route on the slow boat to Guernsey whilst doing my research, just to see want it was like. Today the ferry passes the island of Alderney just half an hour before reaching St Peter Port.

Why do I like Alderney, apart from my family history, and why do I keep a photo of Braye Beach in front of me on my desk? (the same photo which is at the top of this blog)

Firstly it is a very beautiful island, with long sandy bays and sheltered coves. There are abundant walks on which to view the wildlife. The island of Burhou, just off its coast, boasts of a colony of puffins, but there are also gannets on Gannet Rock, albino hedgehogs and black rabbits.  Although you may have heard that the Germans did their best to adorn the island with concrete defences, time has been kind and most are grassed over now or reclaimed. The underground defences still in existence adds a new meaning to the word ‘bunker’ on the golf course, I’m told, but since I know nothing about golf I can’t verify or deny the rumour. I do know that the views from the links are fantastic and there are benches where you can sit and admire them (as long as you keep your eye open for the odd stray golf ball!) There are imposing Victorian Fortresses which give quite an impact to the views as you stroll about, some on the island itself, some with tidal causeways and others totally cut off by the restless sea. You can’t help but admire the Victorian architects and builders who conceived them.

We also love to amble along the unspoilt cobbled streets of St Anne, lined with Georgian cottages and more sumptuous terraced houses and enjoy the wide variety of cafes and restaurants from local sea food to Thai, from fish and chips at the famous Braye Chippy to Pizza. The island just about caters for all tastes.

Now, this island has certainly inspired my writing and I call Alderney ~ ‘Riduna’ in my novels, The Riduna Series. I see Riduna as a character in itself, since feelings towards it run high. My characters either never want to leave her shores or they long to escape. For those who escape successfully, or have to move on against their free will, the island continues to drawn them home by its compelling force which seems to continue to hold sway over the next generation too. A bit like me really, two generations removed!

Well, I would really like to have some guest posts about Alderney for once I’ve finished my virtual tour ‘beyond.’

~If you have any memories of holidays there, of humorous or cheerful tales. or of course of your childhood if you were lucky enough to be born there….

~If you have a special place that you would like to describe or trips or walks you enjoyed especially.

~If you’d like to put pen to paper and get in touch with me, then I have a small competition running.

There will be an ebook or kindle version of Riduna for the first ten entrants too!

As long as you are happy for me to publish your post on this blog, with your name and any links you might like to use related to the island.

The closing date for this will be 12th April, when I have just returned from the island myself!

Get in touch for more details or just to send me your writing  in the body of the email please to:

Filed under Alderney, Ancasta, Channel Islands, Riduna, Virtual Tour of the Solent and Beyond